Which cities have the most pothole complaints?

It’s a war of attrition. Every time your car survives a run-in with a pothole, it takes a little more damage.

You might not notice at first. Your tires weaken with every thud. Your suspension arms and levers twist and bend. The rubber wears off, and you don’t even notice the sound getting clunkier and clunkier.

But sometimes it’s quicker. The asphalt rips through your tire or smashes your wheel out of shape. Even if you get it back on the road, it’s not the same as before.

It’s not your fault (although we’ll go into some ways you can minimize damage). Potholes happen when the asphalt cracks under the pressure of temperature changes, usually in winter and spring. Poor road workmanship doesn’t help. And worst of all are the authorities who leave potholes lying there, sprung like traps.

The best thing to do if you spot a pothole is to report it to your local city, county, or Department of Transportation. A quick web search shows you how. But of course, when people get angry these days, they usually report it to 330 million other users on Twitter. The Clunker Junker deduced that Twitter data is probably the best way to gauge which cities, US states, and English counties have the biggest problem. So we grabbed the data and made some maps and charts.

First, we figured out the number of pothole-themed tweets from every area in the US over the course of a year. Then we figured the total road length of every city and state. And then we crushed these figures together to get the number of Twitter pothole complaints per 1,000km of road in each area. 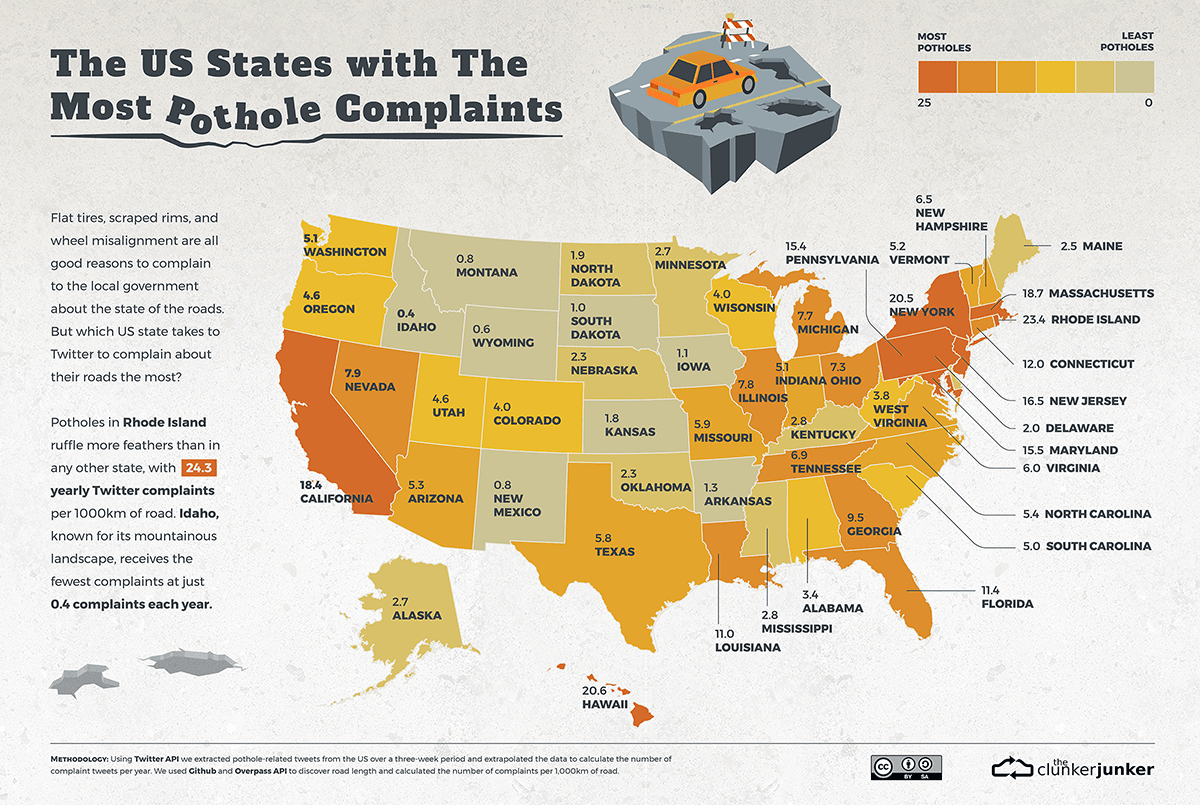 You’ve never driven in Rhode Island. We used to call it “The Pothole State.”

“We used to call it ‘The Pothole State,’” tweets Rhode Islander Melanie Joy. Rhode Island is pothole state #1 by some leap, with 23.4 pothole tweets per 1,000km of road – beating out second-placed Hawaii (20.6). “R

Riding a motorcycle in Hawaii is a mixture of absorbing breathtaking views and then nearly dying by driving into a pothole big enough to be a bomb crater.

“Riding a motorcycle in Hawaii is a mixture of absorbing breathtaking views and then nearly dying by driving into a pothole big enough to be a bomb crater,” tweets Joe Kassabian.

Idaho is the smooth drivin’ state, with local news and government sharing satisfying videos of potholes being filled. The tweet count for Idaho + potholes is significantly raised by drivers nowhere near Idaho using the phrase “Idaho-sized pothole” to describe far-flung road hazards. 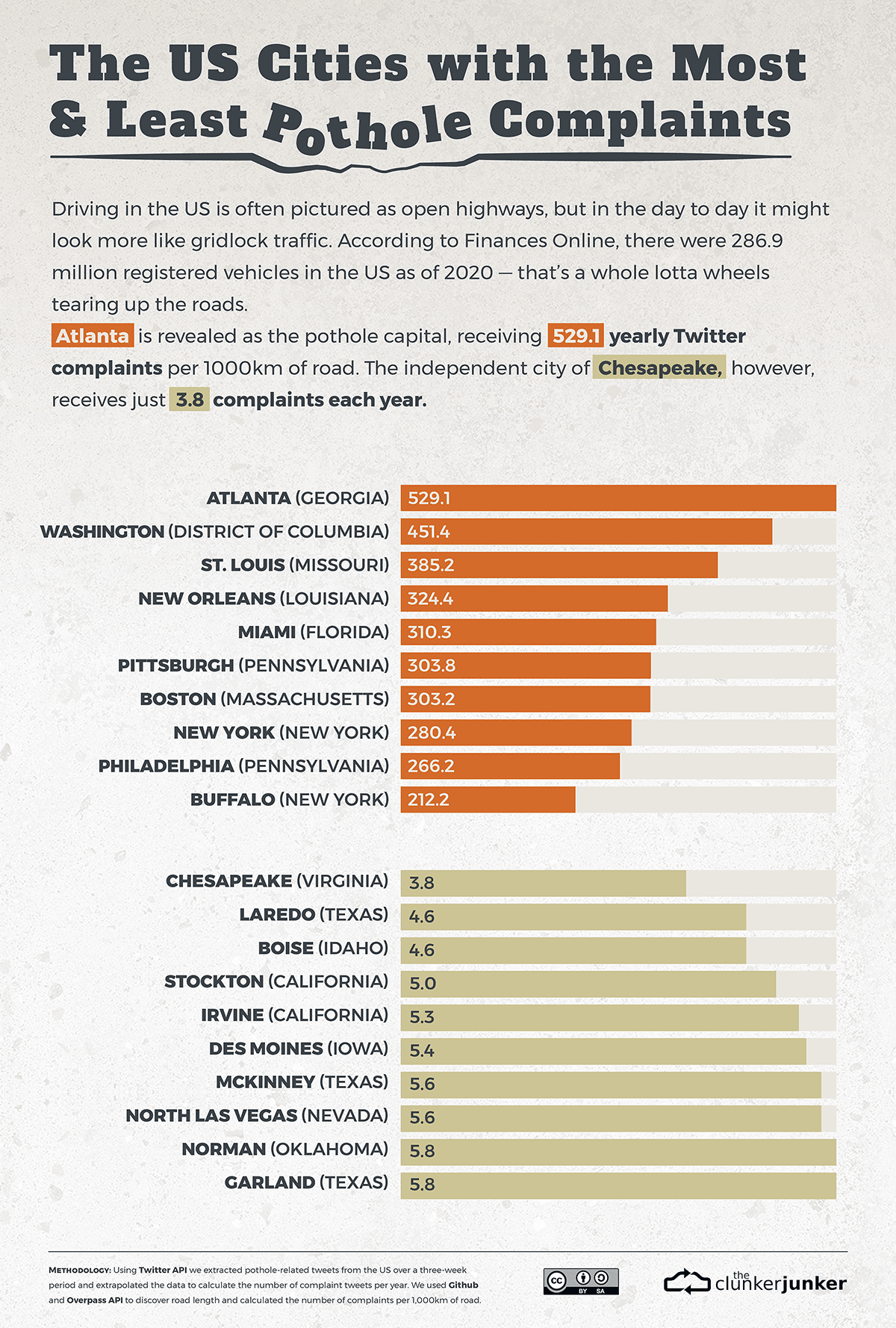 Atlanta, Georgia, is America’s pothole capital. The record books reveal 529.1 tweets per 1,000km of Atlanta road per year. Such a local character is the Atlanta pothole that it has not one but two Twitter accounts of its own – although, like Atlanta’s roads, they are both poorly maintained.

A ‘Greater’ Number of Pothole Complaints

Next, we did the same for UK roads. First up is a map of English counties, showing the number of pothole-themed tweets per 1,000km. Both Greater London and Greater Manchester top the charts as the counties with the most complaints per 1000km of road. 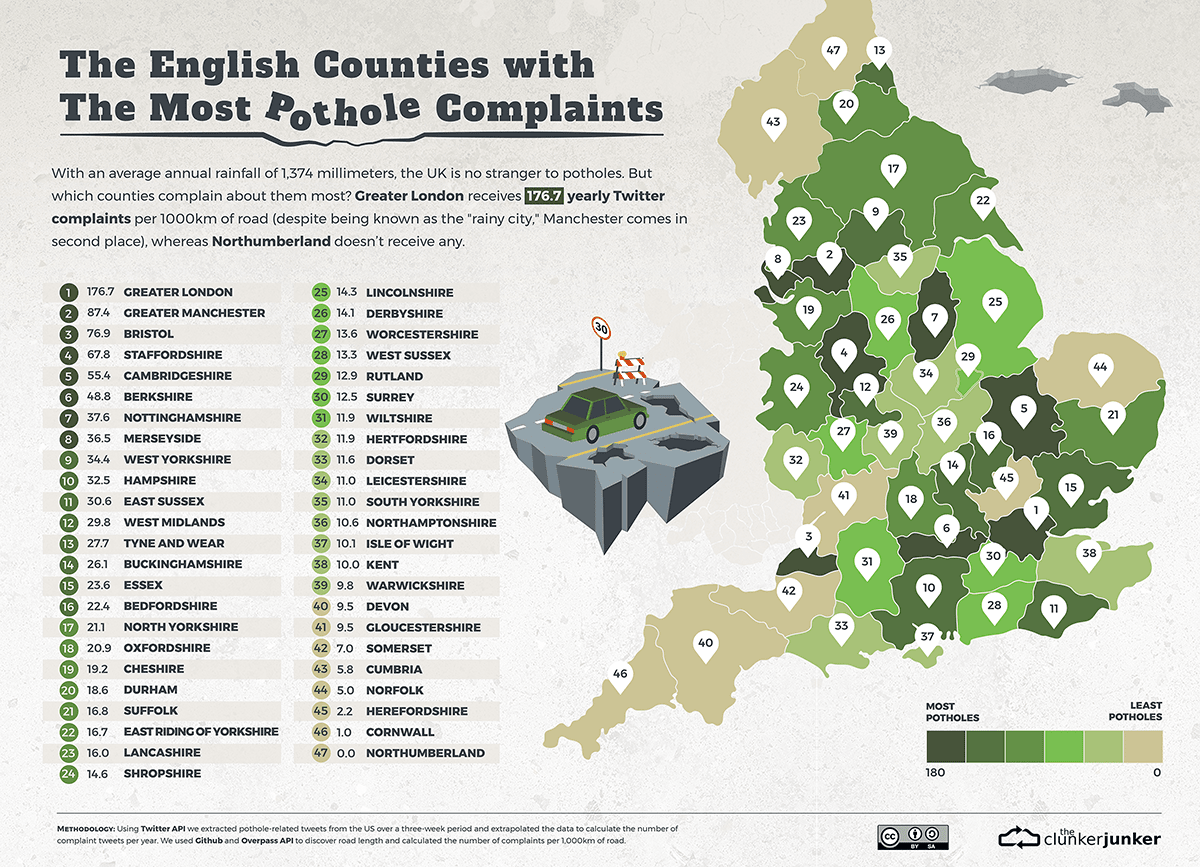 The UK’s road quality is ranked only 37th in the world. You might have expected better from the country that gave us the Rolls Royce. But then, the UK also gave us the Land Rover, perhaps the definitive off-road car. Perhaps it was inspired by a drive around Greater London, England’s potholiest county – according to Twitter.

Here we have a chart showing the most- and least-tweeted-about pothole destinations across the whole of the UK. 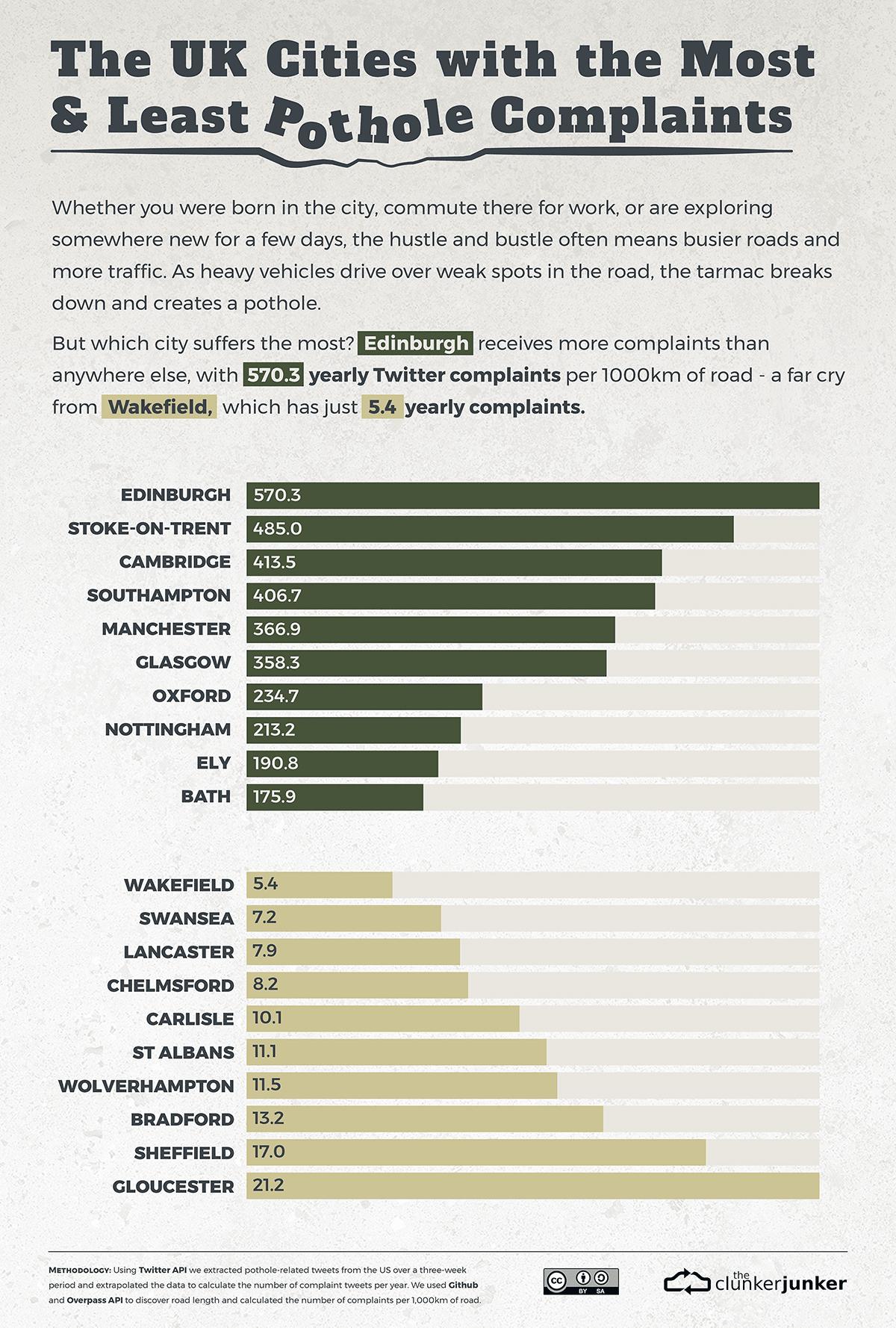 Londoners tweet more than other citizens in general, so a special mention also goes to Greater Manchester. “Manchester roads by where I used to live were disgraceful,” tweets one ex-inhabitant, sharing pictures that are part patchwork asphalt, part archaeological dig into the county’s road history. Greater Manchester is also the scene of the first ‘painted phallus’ protests – the appearance of rude graffiti around potholes to prompt councils to cover them up.

But you need to go north of the border to find the city with the most pothole complaints. Scotland’s capital, Edinburgh, gets the most Twitter ire with 570.3 groans per 1,000km of road. One road user told the local press, “I’ve travelled the length of this country and Edinburgh roads are the worst. Car hire companies tell you to take the extra insurance so you don’t have to pay for damage to tires and rims.”

Potholes are big news right now, with President Biden’s Infrastructure Bill on the table and, more seriously, the famous Seinfeld pothole cropped out of Netflix reruns (“there’s not really a number to call if you wanna make a pothole.”)

To prevent potholes from becoming an issue for you, driving with caution is the best route.

For the full data from our pothole Twitter study, please check out the interactive table below.

We used Twitter API to extract tweets from the UK and the US, including the terms ‘pothole’ and ‘potholes,’ and extrapolated the data to calculate the number of tweets over a year.

We used Github and Overpass API to discover road length for every city and every region in the research. We then calculated the number of complaints per 1,000km of road. To calculate the data for England counties, we merged City of London and Greater London.

The data was collected in August-September 2021.