The Most Loved and Hated Car Brands in Every Country

When it comes to buying a new or used car, brand loyalty often plays a factor in making the final decision. Ask any die-hard car enthusiast about their preferred makes and models, and the answers will vary. Some prefer the premium, Autobahn-busting driving experience of a German-branded car. While for others, nothing beats the turn-key (or push-button) reliability and durability of Japanese vehicles.

Automakers update or create new car models based on changing consumer lifestyles and demands. However, being the largest or oldest carmaker does not equate to being the best and won’t guarantee a thumbs-up from discerning motorists.

Additionally, a handful of EV start-ups have been vying for attention in the fastest-growing segment of the automotive industry since Otto, Daimler, and Maybach patented the four-cycle internal combustion engine in 1876, further rattling the cages of legacy carmakers.

The Clunker Junker wanted to find the most loved and hated car brands in every country. Our data analysts used the AI sentiment analysis tool HuggingFace to determine the positive and negative sentiment of tweets about car brands, revealing which big names in the motor industry are most loved and loathed the world over.

The World Loves Tesla and Mercedes-Benz

Did you know that American EV pioneer Tesla reigns as the darling of today’s global auto community? Despite being the most hated car brand in 16 countries, it is the most loved brand in 21 countries, including Iceland, Norway, and Switzerland.

The electric automaker is currently more valuable than the likes of Toyota, VW, Daimler, Ford, and GM combined - with an estimated market value of $1 trillion. In addition to brand recognition and perceived elite status increasing the demand for its vehicles, car buyers are also drawn to Tesla models due to the cost of fossil fuels and a desire to lower their carbon footprint. 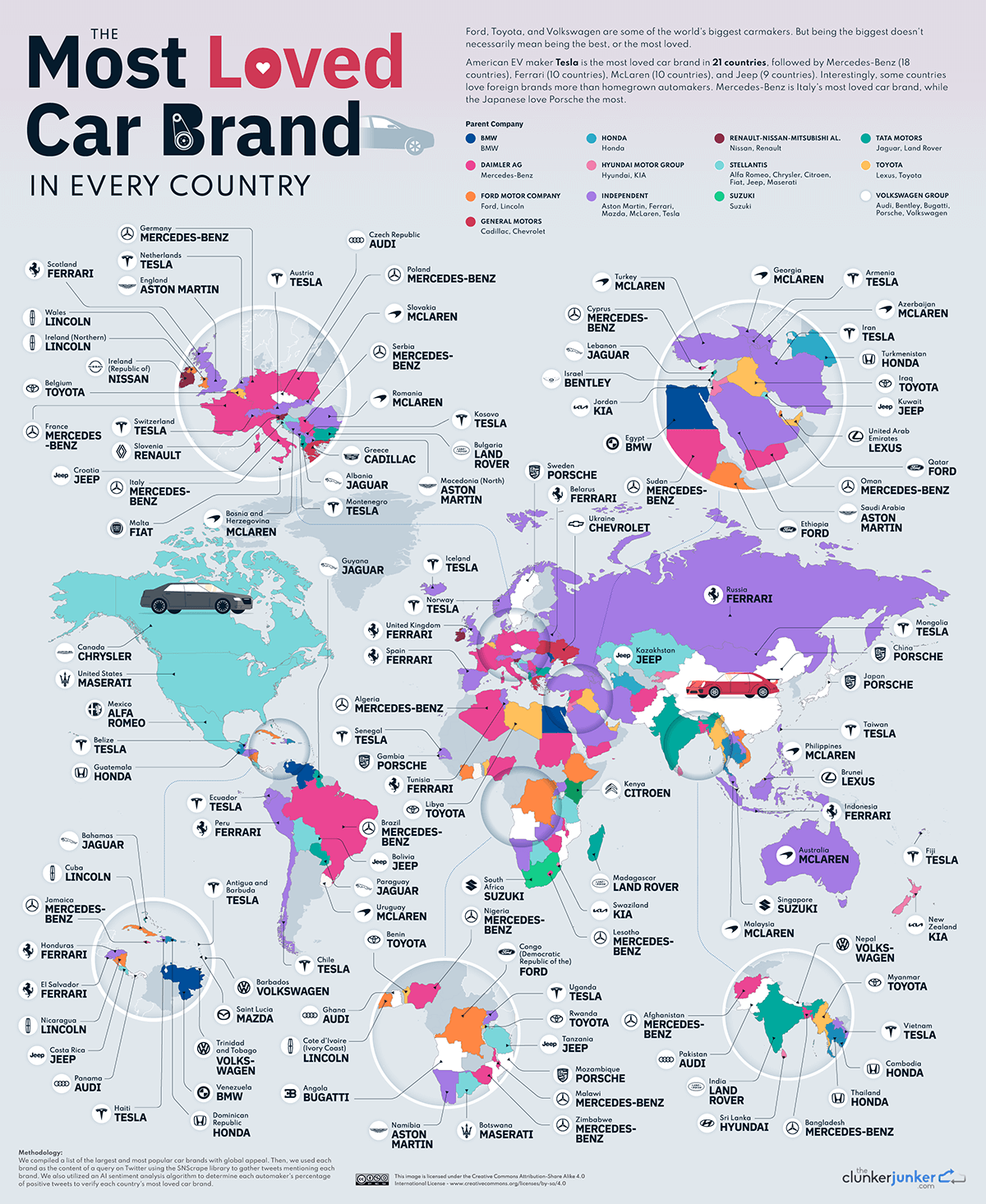 British supercar maker McLaren and American off-road pioneer Jeep also received lots of love from the global automotive community. Ferrari is the most loved car brand in 10 countries, including Spain and the United Kingdom. Despite being the origin country of Ferrari, Italians adore Mercedes-Benz the most. Japanese car brands Toyota and Suzuki are big in Belgium and Singapore; however, Porsche is Japan’s most loved auto brand.

The world has a love-and-hate affair with some of the biggest names in the automotive industry.

As it turns out, more countries hate Ferrari than those who favor it. Though the brand is the most loved in 10 countries, it earns the distinction of being hated in more countries than loved, as 18 countries take to Twitter to complain about the brand. And it’s not the only one to divide opinion. 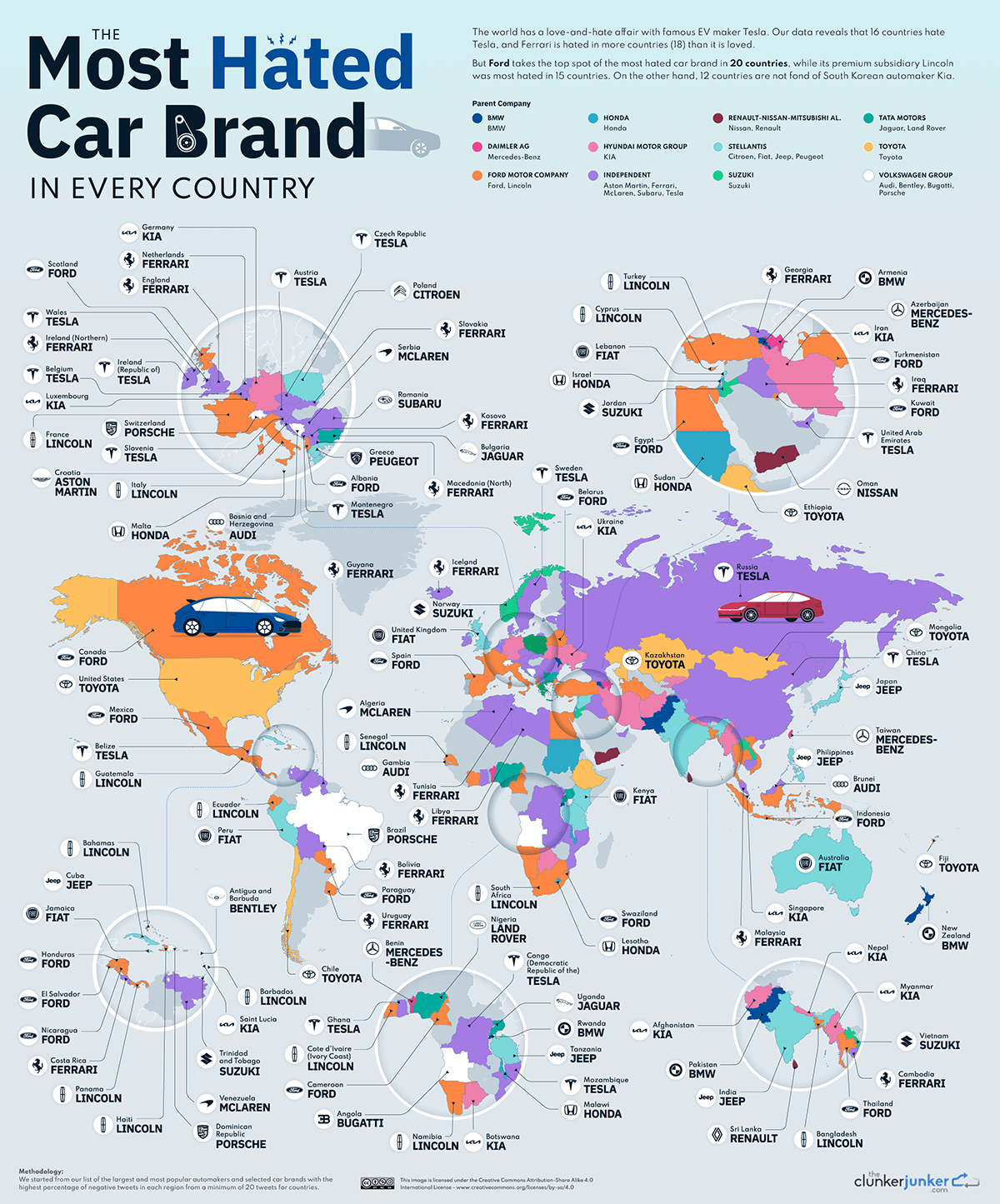 Ford claims the title of being the most hated car brand in the world. Tweets about the carmaker were the most negative of any other car brand in 20 countries, while its premium subsidiary Lincoln was most hated in 15 countries.

Consumer reports have consistently put Ford at the bottom of the pile. When looking for reasons as to why, one Quora user said: “Ford stands for “Found On Road Dead”, because of their supposed mechanical failures after a few years. They also historically have had poor gas mileage and not very attractive designs.”

Maserati Is The Most Loved Car Brand in America

Italian designers know a thing or two about creating something beautiful - from iconic paintings to world-renowned fashion. And Italian carmakers are no exception. Founded in Bologna, Italy, in 1914 by five brothers obsessed with Grand Prix racing, Maserati is constructed with the utmost attention to detail, making them “a true masterpiece of Italian design.” However, the state of Alabama is alone in favoring this car brand more than any other state. 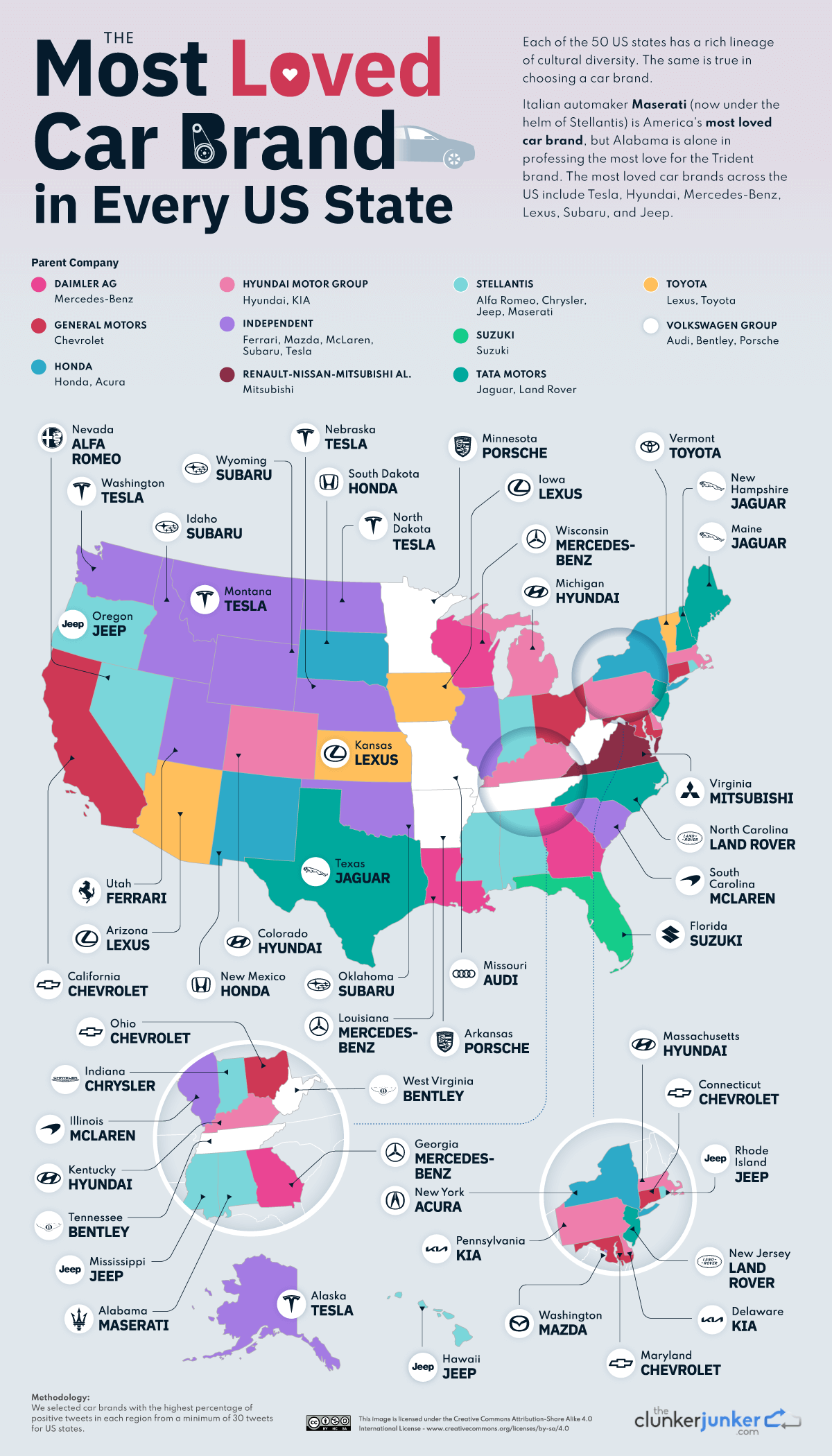 Jeep has a reputation for reliability and durability. Glance into the advertising world, and the brand sells more than just a car that gets from A to B. Their tone of voice supports a lifestyle of adventure, boundless freedom, and fun while also being responsible, safe, and environmentally friendly.

Despite its origins in California, the Tesla brand is favored in Alaska, Montana, Nebraska, and North Dakota. While Chevrolet is the most beloved carmaker in the Golden State.

American Drivers Hate Fiat the Most

Italian auto giant Fiat is the most hated car brand in the US, with 11 states, including Arizona, New York, North and South Carolina, and Tennessee, all declaring their dislike for the brand on Twitter.

Fiat pulled out of the American market in the early 1990s due to poor sales. The Italian automaker then staged a comeback in 2011 when they stepped in to save bankrupt competitor Chrysler.

Despite becoming what is known today as Fiat Chrysler Automobiles, it appears that Americans are still reluctant to buy, drive or say a nice word about the brand. So could Fiat be heading towards another pull-out in America? 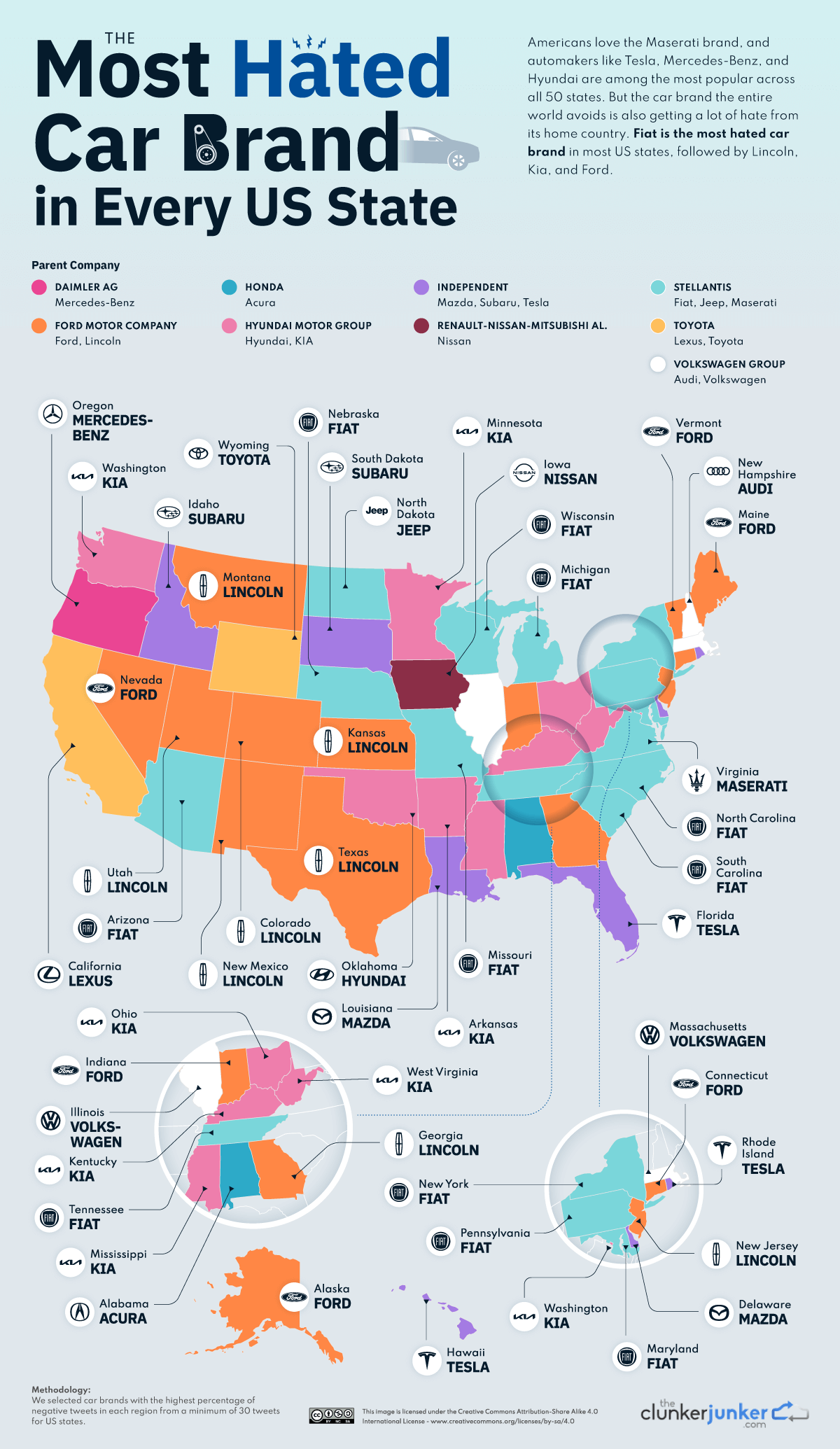 The Ford-owned Lincoln brand is one of the most hated car brands globally. On a more granular level, the brand receives a thumbs-down from eight states, including Colorado, Georgia, and Kansas - making it the second-most hated car brand in the US.

The Toyota brand is a mainstay on American roads, but Vermont is the lone state to profess its undying love for the Japanese carmaker.

Tesla Divides Opinions Across the World and in the States

There’s no doubt that Tesla jump-started the global EV industry to unimaginable heights. Despite rising competition from new and established brands alike, Tesla vehicles remain on top of the hierarchy, and almost half of the world agrees. 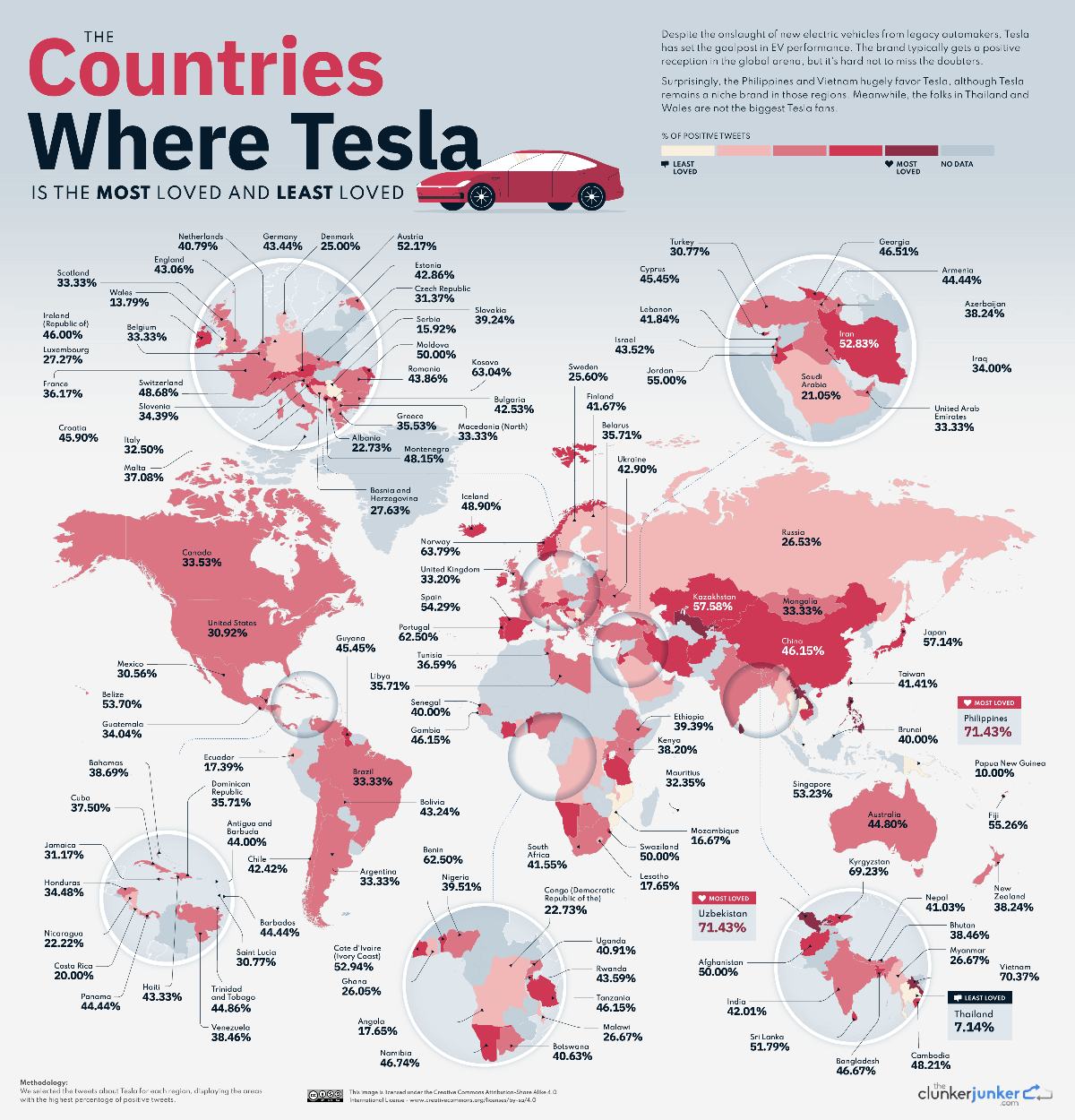 Although Tesla may currently be the world’s most valuable and most loved car brand, it also has its fair share of doubters. More than anything, Tesla reflects what people hate most in a car: Shoddy build quality, dizzying technology, and an astronomical price. Perhaps because of this, Tesla is the most hated car brand in 16 countries like China and Sweden.

Despite its rising popularity among mainstream car buyers, drivers in Wales, Ecuador, and Thailand are not looking forward to owning a Tesla. But what about drivers in the states? 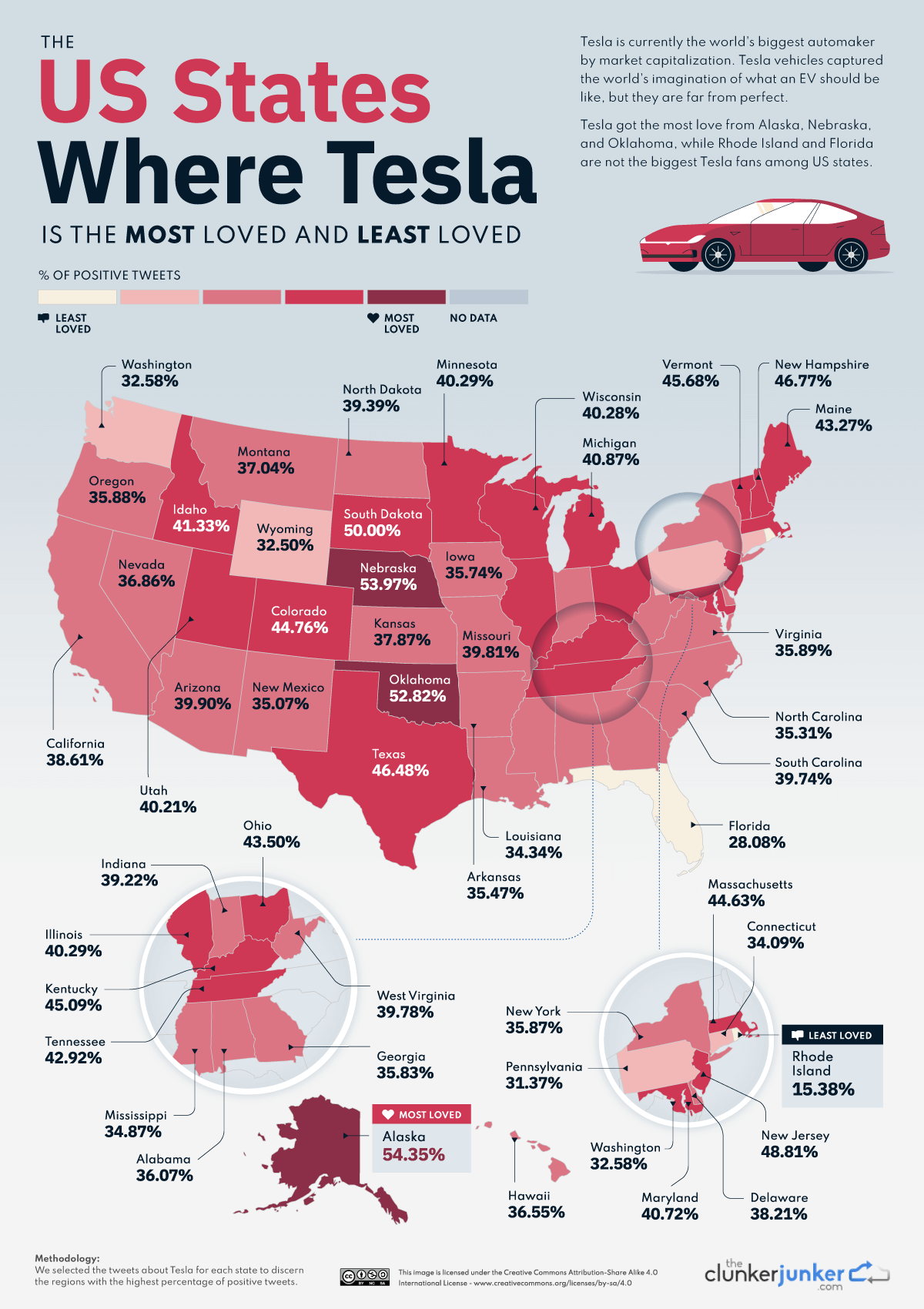 America’s homegrown Tesla generally divides opinion. The brand gets a heart emoji from Alaska, Nebraska, Oklahoma, and South Dakota, who all returned ratings of 50% or above when it comes to the positive sentiment of Tweets.

Meanwhile, the states of Rhode Island and Florida are less than enthused, with only 15.38% and 28.08% of tweets containing a positive sentiment, respectively. Even in the state of the brand’s origin, only 38% of Californians have given the EV maker a passing rank.

Cars Make the World Go Round

The Benz Patent Motorcar from 1885 is considered to be the first practical automobile and the first car put into series production. Cars have come a long way since then, both in design and location.

In 2021, almost 80 million motor vehicles were produced worldwide, according to Statista. This figure translates into a 3% increase from the previous year in which China, Japan, and Germany were the largest producers of cars and commercial vehicles.

Every carmaker has its own style and idiosyncrasies. This could well be the reason why some people from different countries or states are more drawn to a particular car brand or model. But which cars are the most loved and loathed across the globe? Discover our full data set in the HTML table below, filtering by love/hate and location.

While anyone can take to social media to express their pride or despair with whichever model they’re driving, car enthusiasts will argue that there is more to motors than meets the eye - and the drive.

Psychologists claim that vehicle owners form close, personal bonds with their motors. If the old adage of “we are what we drive’’ holds true, then our cars are an extension of our personalities. Self-expression in the form of plastic, metal, and wheels.

And so one man’s old banger will be another man’s pride and joy. Luckily, selling your well-loved wheels is easy with The Clunker Junker.

We have put together a list of the biggest and most popular car brands with global appeal using various specialized webpages (such as https://companiesmarketcap.com/automakers/largest-automakers-by-market-cap/).

We then pulled all geotagged tweets mentioning these brands from every country and US state. To ensure these tweets were talking about the cars in question, we built a list of terms related to driving and filtered out tweets that didn’t include some of these terms.

To determine the most loved/hated car brand in every country and state, we isolated the brand with the highest % of positive and negative tweets, respectively.

For the Tesla maps, we ranked countries and states based on the % of positive tweets.

For the US and UK top 10s, we isolated the 10 car brands with the highest % of positive and negative tweets, respectively.

The data was collected in March 2022.