The Most Dangerous U.S. Cities and States to Drive

Differences in roadway design, driver behavior, weather conditions, and other regional factors make some areas far more dangerous to drive in than others. But where in the states should you take extra care when getting behind the wheel?

Car experts at The Clunker Junker have analyzed data from the National Highway Traffic Safety Administration to determine the most dangerous places to drive in the U.S., ranking each state on the number of annual car accidents per 100,000 registered vehicles.

Mississippi Reports More Car Accidents Than any Other State

The most dangerous states to drive are places where residents use their cars the most. In Mississippi, drivers put an average of 13,700 miles on their cars per year, the fourth-most vehicle miles traveled per capita of any state. With 30.1 accidents per 100,000 vehicles every year, the magnolia state is the most dangerous for driving - according to our research. 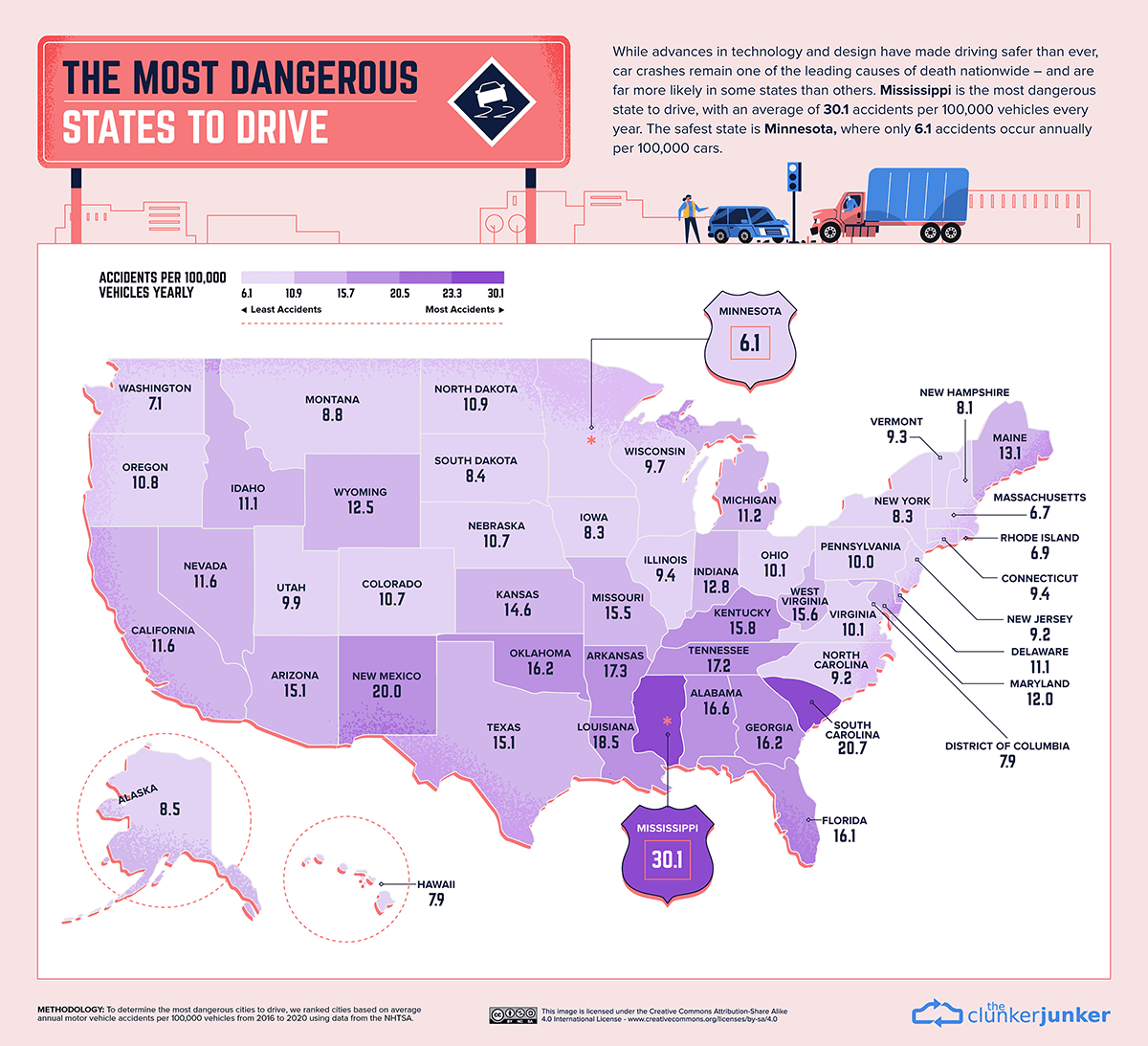 Drivers in New Mexico average 14,200 miles per year, and drivers in Alabama average 14,500 miles a year. These two states place third- and eighth-most dangerous for driving, respectively. The increased car use, combined with the high speeds and low visibility of rural roads, makes these Southern states some of the most dangerous places for driving in the United States. Meanwhile, Minnesota is the safest state to drive in, with 6.1 accidents occurring annually per 100,000 cars.

Southern Cities Lead the 10 Most Dangerous Cities to Drive

While motor vehicle crash deaths are nearly twice as likely to occur in rural areas than in urban areas, cities have specific characteristics that make driving more dangerous and increase the likelihood of car accidents. Pedestrian and bicyclist activity, tailgating and traffic jams on multi-lane freeways, potholes, and confusing one-way streets can all make city driving more dangerous. Cities with a high degree of sprawl also tend to have more accidents per capita, as drivers in sprawling areas travel at higher speeds and are required to drive more often overall.

Using data from the NHTSA, we identified the 10 cities with the highest number of motor vehicle accidents per 100,000 vehicles from 2016 to 2020. 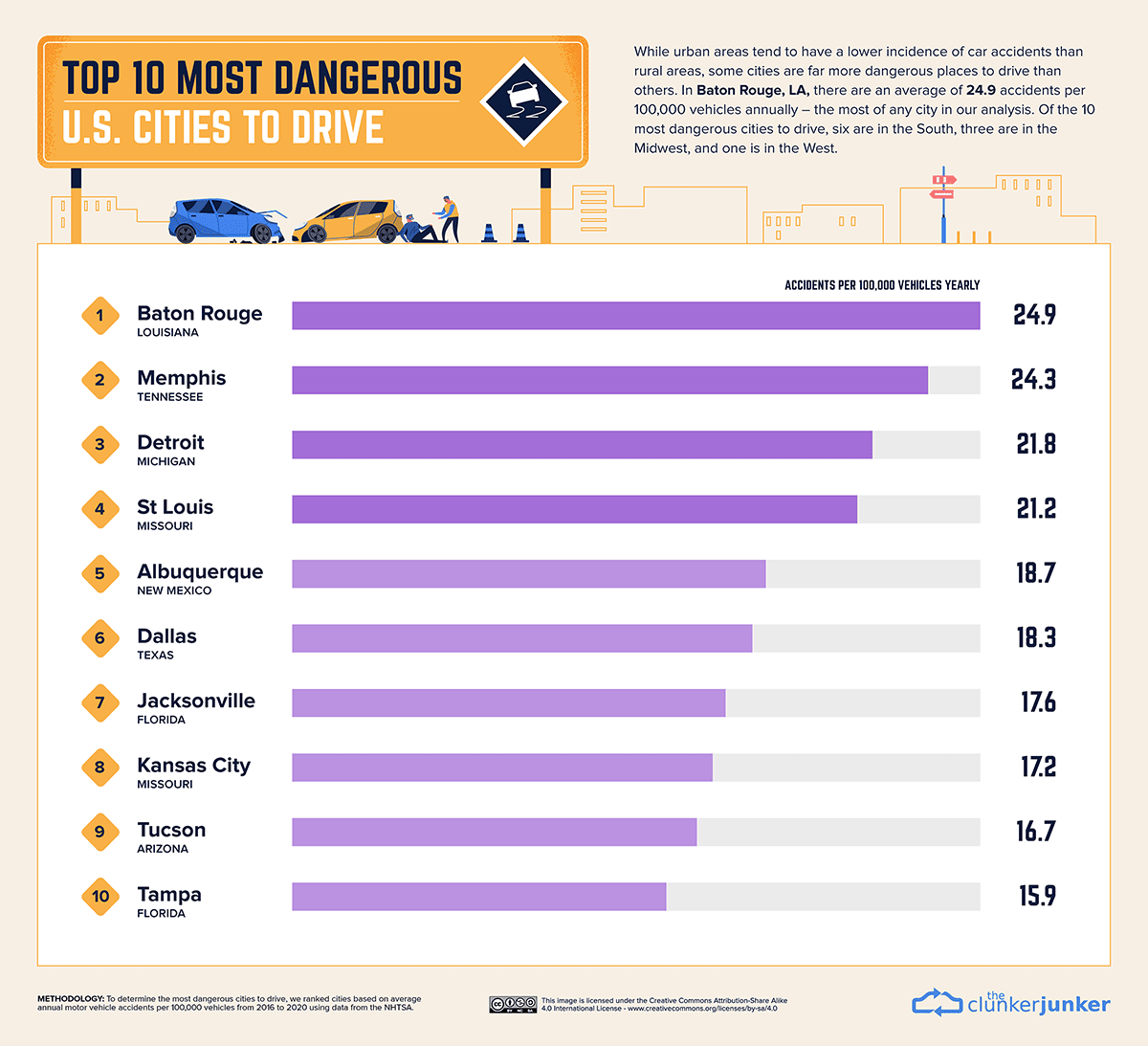 According to our analysis, Baton Rouge, the capital and second-largest city in Louisiana, reports an average of 24.9 accidents per 100,000 vehicles annually, making it the most dangerous city for driving.. In 2014, the city gained the dubious distinction of being the most sprawling midsized metro in the U.S.

Of the 10 most dangerous cities to drive, 6 are in the South, 3 are in the Midwest, and 1 is in the West. Most of the cities are mid-size metro areas with a mix of urban and suburban development.

Rural Counties Are the Most Dangerous for Driving

Looking at the rate of accidents per capita at a county level shows an even greater disparity in driving deaths throughout the United States. Many of the most dangerous counties are in rural areas, where high speeds, fatigue associated with long driving distances, and poor visibility combine to make for dangerous driving conditions. In 18 of the 25 most dangerous counties for driving, more than half of the population lives in rural areas.

While only 25% of travel occurs at night, nearly 50% of fatal car accidents occur after the sun goes down. In some cities, the disparity is even greater, with more than two in three car accidents occurring at night. A number of factors play a part in the increased risk, such as fatigue and low visibility. To determine the most dangerous cities for night driving, we ranked the 100 most populated U.S. cities based on the percentage of accidents that occur after dusk – both with illumination from streetlights and without – with data from the NHTSA. 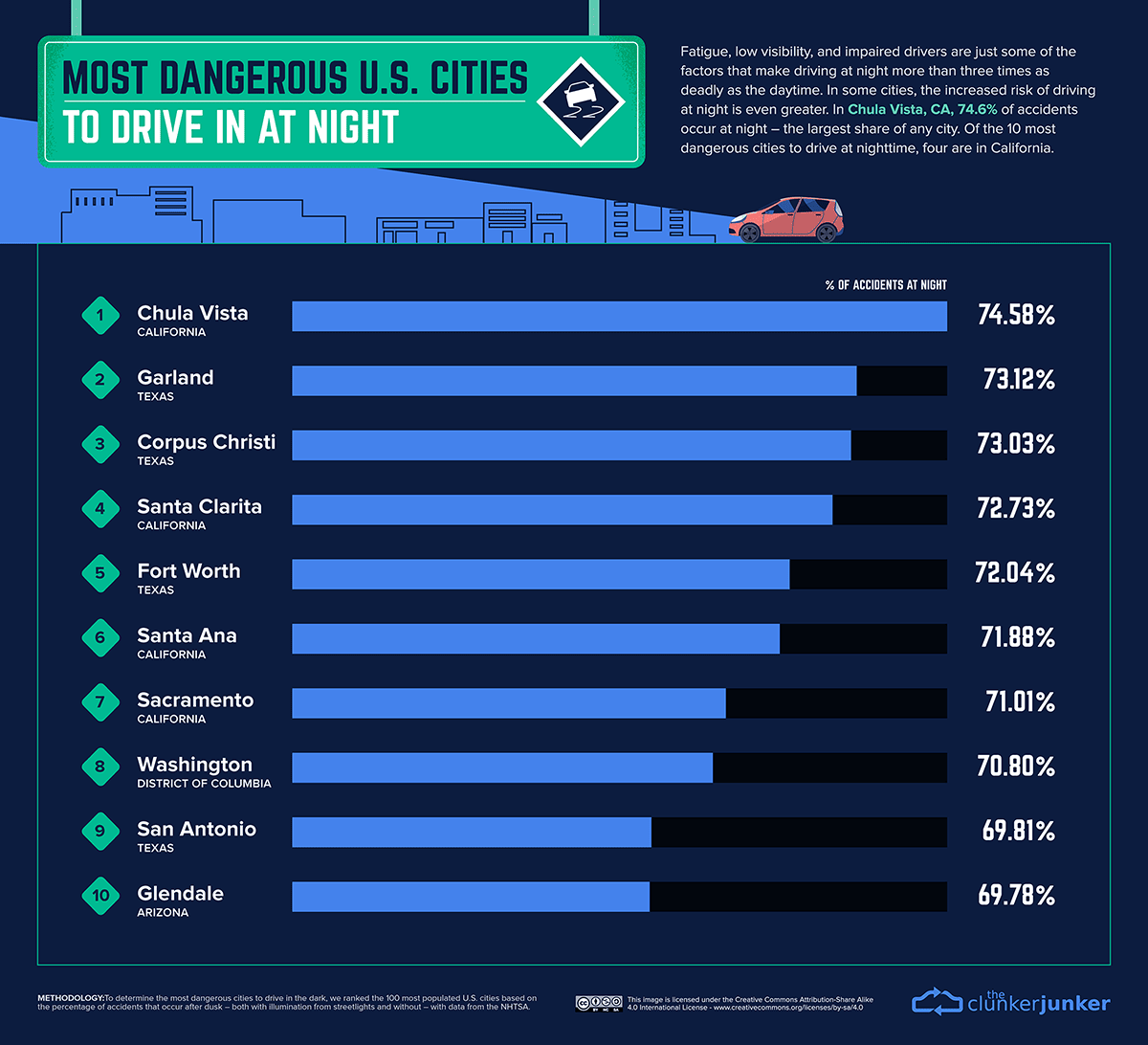 The states of California and Texas are each home to four of the top 10 cities with the most nighttime accidents. Chula Vista, the second-largest city in the San Diego metropolitan area and the seventh-largest city in Southern California, is the most dangerous city to drive after dark. 74.6% of all reported car accidents occur at night, which is the largest share of any city.

The rate of car crashes per 100,000 vehicles at various levels of geography shows a range of locations where drivers are more likely to get in an accident. From sprawling metropolises to mid-size cities, including both rural and urban areas, the most dangerous U.S. cities and states for driving are scattered right across the map.

Cautious motorists may want to look through the table below to find the cities, counties, or states they should be wary of driving through on their next road trip.

While it can be useful to know which areas are more prone to car accidents and fatalities, the real risk factor to consider when driving is other people. Whether you are commuting to and from work, paying a visit to family or friends, or are road tripping across the country - remember to keep your eyes on the road and your hands firm on the wheel.

To determine the most dangerous places to drive, we collected data on car accidents reported from 2016 to 2020 from the National Highway Traffic Safety Administration.

To reveal the places where it is more dangerous to drive at night rather than a day, we split all accidents into two categories, “dark” and “day.” We included in the “dark” category the accidents with the following lighting types noted: ‘Dark - Not Lighted,’ ‘Dark - Lighted,’ ‘Dark - Unknown Light.’ In the ‘day’ category, we included only those accidents that occurred under the illumination - ‘Daylight.’ Data on light conditions came from the NHTSA.

The data was collected in March 2022.