Where does your junk car end up after you’ve sold it to TheClunkerJunker.com? While some cars may get spruced up and given a new driveway or garage to call home, others seem to sit in junkyards for a VERY long time. That is, until some crafty people come by and give them new life! The tires that have holes that can’t be patched can become beautiful chandeliers for the hallway. The banged up rims are now wall art for the kitchen.

A Temple To Junk Cars

You may have heard of Car-henge, located in Alliance Nebraska, a clever take on Stonehenge, but that’s not the only place you can see cars placed in precarious positions. Check out this awesome piece of art made from junk cars in Sarasota Florida. It’s called “The Dance” and was either created by extraterrestrials or a local artist named Dustin Schuler. We’ll let you decide. When it was first erected, locals were getting into the cars to have their pictures taken behind the wheel. The doors are now welded shut for safety reasons. 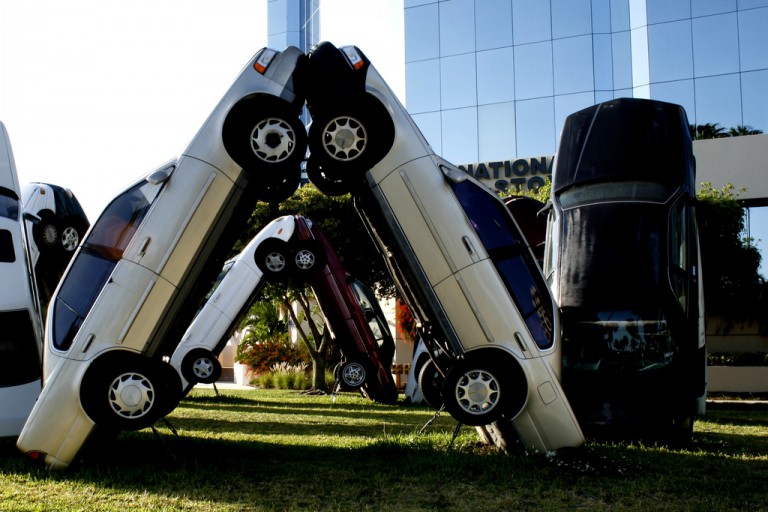 Most of the time hubcaps are thrown to the side and end up collecting dirt, rust, and looking worse than they ever could on a car or truck. Dallas Texas Artist Sharon Zigrossi refuses to let that happen. After cleaning and painting these seemingly useless hunks of metal and/or plastic she turns them into decorations for your home, garden, or office. Most of her work also features embellishments such a rhinestones, bottle caps, and mirrored glass. Quite a few, including this one called “Daphne,” are featured on a rotating display in the offices of Burson & Williams Architects, and many have been sold! 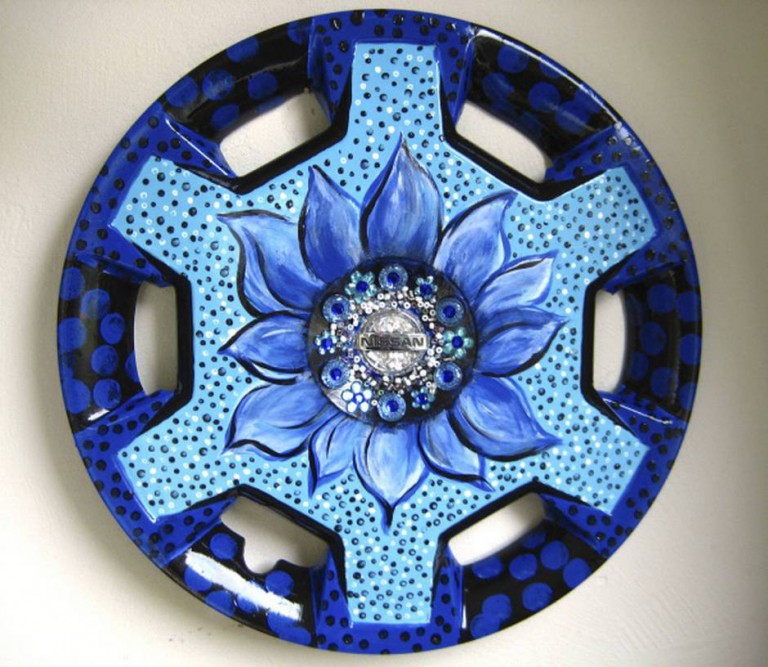 Lugnuts, and tires, and bearings… Oh my! On a normal day, we probably see two or three tires that have been shredded to bits and now lay on the side of the road. These usually come from semi-trucks and have been cleared out of the path of oncoming traffic, but where do they go after that? Sometimes they end up decaying on the side of the road, but Lahcen Iwi, and artist out of Morocco, carves his amazing sculptures out of tires. These range anywhere in size from bike tires to truck tires, and until January 2015 he was on exhibition at The Institute of the Arab World in Paris for the “Morocco Contemporary” event. 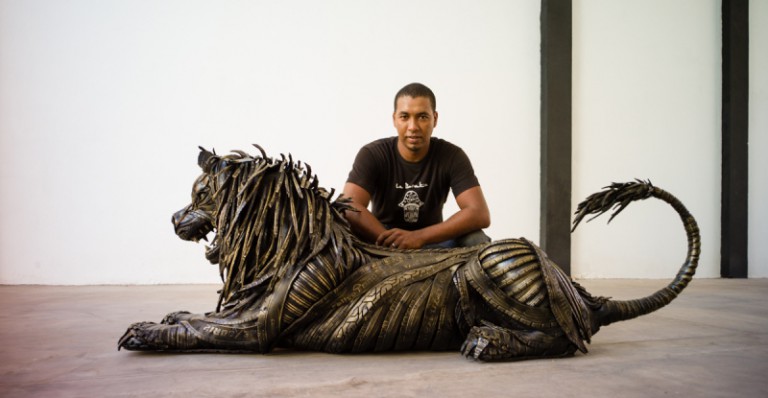 A Vial Piece of Jewelry

While some people usually try to keep fluids such a gasoline, anti-freeze, and oil inside their cars and away from their hands, Ausra Bankauskaite from Lithuania has found a beautiful way to turn these liquids into jewelry. Her tiaras and rings have been featured in Vogue, but this one-of-a-kind bracelet shows that there is beauty in everything (including transmission fluid). The five vials contain gasoline, antifreeze, transmission fluid, brake fluid, and machine oil while the back of the bracelet features a timing belt! There’s no price on her amazing work of art as this seems to be the only one of its kind. 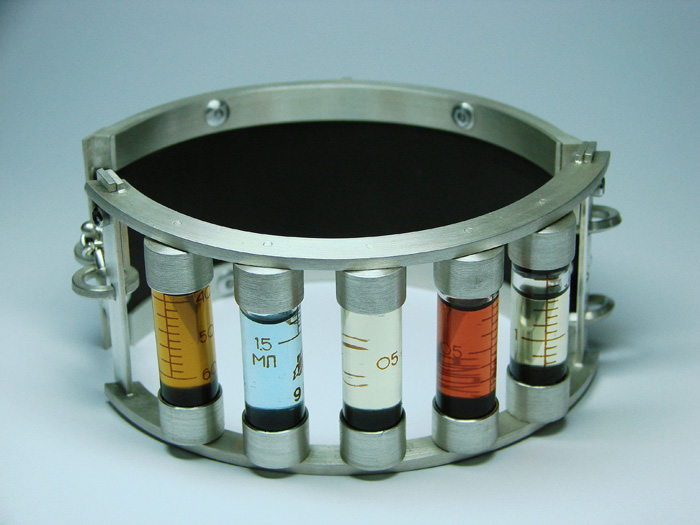 After Lindsay Lohan and Herbie became friends, Herbie found himself needing a new job. Tired of life on the road, he retired to a life of endless summer grilling. The Love-Bug becomes the Grub-Bug! One crafty chef decided that his grill was cool (or would that be hot?), but it would be REALLY amazing if it was a Volkswagen Beetle. Don’t worry, I bet they found a great idea for all the parts under the hood! We want to know what happened to the rear end. 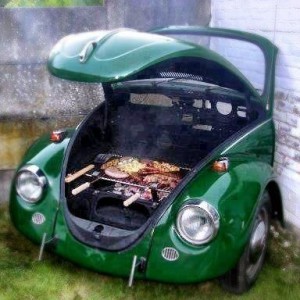 Grandma Would Be Proud

Often, the junk cars we buy are in running condition, but the exterior makes you shudder. That dent on the side may bring the value of your Civic but some duct tape can make it all better. Meet Severija, a Lithuanian artist who loves cross stitch. She first drills holes into metal, then creates designs that remind you the sampler than Grandma made for you when you were five. Her skills don’t stop at car doors and hoods, though. She has created masterpieces from shovels, pots, and even rusty tin cans. Some designs can simply mask an ugly scratch, but others transform a regular mode of transportation into a working piece of art. 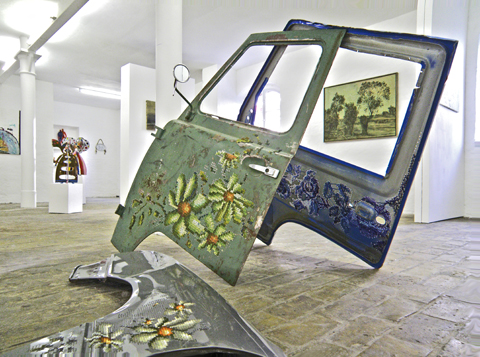 At TheClunkerJunker.com we understand that our cars are a huge part of our lives; for some they get us where we need to go, for others they’re like our children. And, of course, we hate to see our babies go to another person. The amazing folks at New Retro Cars take those vintage, sometimes rusty, classic cars and turns them into furniture you can enjoy for years. Look what they did to this VW Bus. And this Plymouth. Our favorite is this couch they made from a 1957 Bel Air. 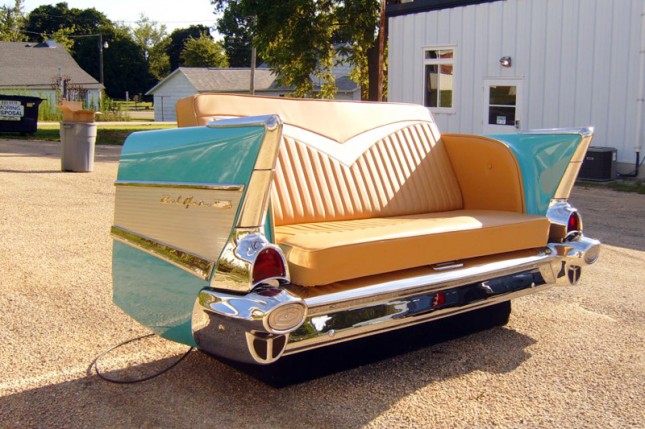